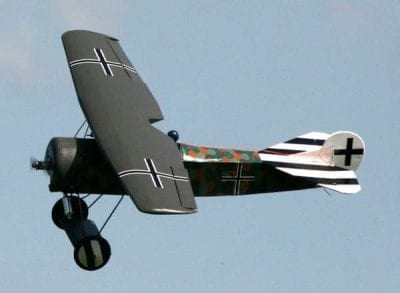 The model is of conventional all-wood construction, but some metalworking skills will be needed to fabricate parts such as the undercarriage and wing struts. A laser-cut wood-pack is available which contains most of the shaped parts needed such as fuselage formers and wing ribs, but you will need an additional sheet and strip wood and ply to complete the model, as well as all the hardware needed. An additional Wood Pack is available also from Sarik. The model was designed to be powered by a .25 cu.in. two-stroke or .30 4-stroke engine, but experienced modellers could probably convert it to electric power (Plans now show Electric conversion)

The last Fokker designed aircraft to become operational with the German Air Force during WWI was the Fokker E.V, which entered service in the final months of the war. The aircraft proved agile and easy to fly but was withdrawn after a number of fatal accidents due to wing failures. Initially, this was blamed on a design fault, but investigation revealed that they were in fact caused by shoddy workmanship and the use of poor quality materials. Production practices were overhauled and the aircraft was modified and redesignated Fokker D.VIII. Dubbed the Flying Razor by Allied pilots, the D.VIII had the distinction of scoring the last aerial victory of the war.

There are no reviews yet.